Today, we decided to be at the finish line for the Peking to Paris rally. Sounds good in theory you say, but in practice, well it was anything but. Having been told that the rally cars including a Citroen which was raising money for  Tasmanian devil research, would end at the Arc de Triomphe  we walked from our hotel just up from the Tuileries Garden.  Arriving at the famous monument, we were just in time to see the rally winners, including the 1974 CitroenDS23 driven by owner entrepreneur Rob Sherrard, and which finished third, zoom past us back down the Champs-Élysées towards Cleopatra’s Needle  (in the same direction from where we had just come). So we tramped back again to find the cars, parked on display just 100 metres no less, from our hotel! The achilles are not going to recover for a little while now.

But it was a good day, meeting up with Tassie friends, Michael Aird (who is chairman of the Save Tasmanian Devil Appeal) and Jane McGee, and Paul and Margaret Lennon, who have just completed a cruise and are heading to Scotland.  Michael and Jane, like us, will be going to the UK to cheer on the Australian Test cricket side for The Ashes, the latter needing as much support as it can get.

A few photos to show some of the highlights of the day.

The Arc, a long way away

Decided to skip Maxim’s for lunch 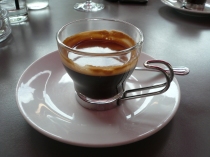 …but stopped for a coffee break

.. and a little Sephora shopping 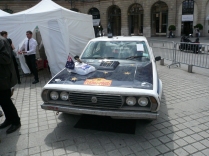 to the eventual rally winner, a Leyland P76 – heavily modified! 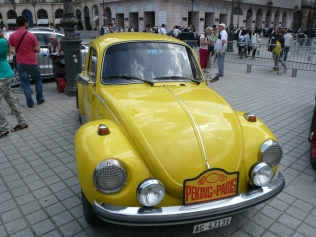 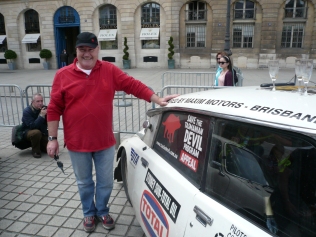